We started our new Science Topic – Forces  – on Monday.

First of all we discussed what we already know about forces and recorded this in our books. Then we looked at some images and tried to identify what force was being used and how it affected the object.

After that we started to think about gravity. We drew on a post-it what we thought would happen to a ball thrown in the air on the other side of the world. We agreed it would behave the same no matter where in the world it was because of gravity.

We discussed the difference between weight and mass.

Our next task was to find out the strength of the force of gravity on some classroom objects, using a forcemeter.

We used a plastic wallet, a collection of objects and a forcemeter.

We measured using grams and Newtons. We also chose how to record our findings. Many of us decided to draw a table as this organised the information clearly. 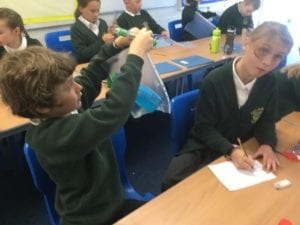 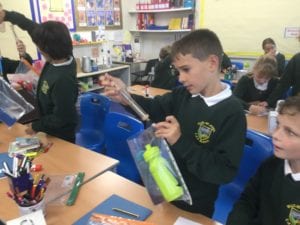 Some of us began to notice a pattern between the grams and Newtons. We discussed what it could be and discovered that 100g =1Newton

We agreed that accurate measurement and recording was really important.