In English, we have started exploring Macbeth. To do this we did some role play. We worked with a partner to freeze frame a sound effect from the battle scene between King Duncan’s men and the Scottish rebels and the Norwegian army.

To do this, we closed our eyes and listened to a short excerpt from the battle on BBC School Radio. Then we discussed what we heard and made a list of the different sounds e.g. the clashing of swords, the sound of war cries, the sound of horses. We used this to create a freeze frame that showed that sound effect. 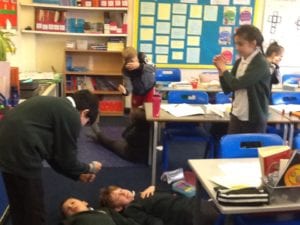