Here is the learning for today:

Here is this Maths activity sheet:

Here is the topic timeline:

Today, in our topic lesson we are learning about a very significant person who lived in South Africa, Nelson Mandela. You can learn about why he is so significant using the topic activities from today. Nelson Mandela believed that everyone should be treated equally and fairly and campaigned for the rights of black people in South Africa. Picture News this week has chosen to look at the ‘Black Lives Matter’ campaign. 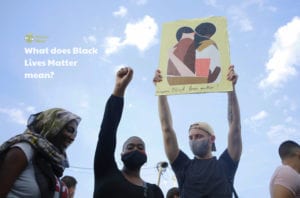 Listen
Look at the poster image, do you know about the protests currently taking place in America and in other cities around the world?

Many people in America feel the police and the justice system treat black people unfairly compared to how they treat white people. African Americans are five times more likely to be sent to jail than white Americans.

People want to raise awareness of racism and are trying to change the opinions and actions of others.

Have you heard of the Black Lives Matters movement?

Recent protests have brought the ongoing movement to the front of peoples’ attention all around the world. The movement campaigns against violence and racism and fights for equality for black people around the world. It started in 2013.

On Tuesday 2nd June, millions of people around the world shared a plain black image as part of ‘Black Tuesday’, a global event to protest against racial inequality.
Organisers behind the movement asked people to, post a picture of a black square on their social media account, mute their account for the day and use the time they would otherwise be on social media to educate themselves on Black Lives Matter.

Do we think Blackout Tuesday was an effective way to raise awareness?

Can you think of any other ways to raise awareness about an issue we care about?

Reflection
Black Lives Matter and Blackout Tuesday are movements to both raise awareness and educate people about racial inequalities around the world. Racism is something we can all learn about and find out ways that we can support and promote equality for all.

About the Author: Rebecca Walton