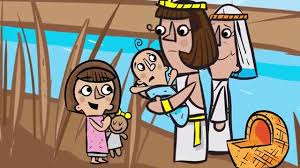 When Moses was a baby, the Egyptians caught the Israelites and Moses mummy put him in a basket and sent him down a river to escape! (Don’t try this at home!)

The Pharaoh’s daughter found Moses and brought him back to the palace to look after him. Moses grew up to be very important in the palace and everyone in Egypt loved him especially the Pharaoh! Nobody knew that Moses was actually an Israelite but Moses knew that even though he was loved he didn’t really belong in the Palace.

Moses ran away from the Palace and fell in love with a woman called Zipporah, they got married soon after (Awwwww). Shortly after getting married GOD talked to Moses through a burning bush and told him to go back to Egypt and tell the Pharaoh to let his people (The Israelites) go and stop treating them badly.

Moses didn’t think he was the right person for the job but GOD reassured him that with GOD on your side you can do anything. Moses couldn’t speak very well so GOD sent Moses brother Aaron to go and help him. So Moses and Aaron head to the palace.

Now this next part of the story you can find in the book of Exodus in the bible. Exodus actually means a large number of people leaving somewhere, so this book is all about the Israelites leaving Egypt.

So Moses tried to convince the Pharaoh to let his people go, which didn’t quite work at first. So God took charge and Moses led his people out to safety.

**Fun Bible fact. The Israelites actually walked for 40 years before they found their perfect home!***

So two things to do today.

Whats the longest or furthest you have ever traveled and how long did it take? (Ask your mum and dad, you were probably asleep!)

Draw a picture of your favourite part of the Moses story. There’s loads to choose from like Burning bushes, babies in baskets and even plagues (If that’s your thing!)

As usual send your thoughts, ideas and creations via e-mails to myself or Mrs Tyson.